“Don’t spin and don’t make any major mistakes.” That’s what Eddy Gonzalez and his stalwart teammates kept thinking as they competed in Nissanfest 2018 at Evergreen Speedway.

Their quest to improve on the second-place finish last year was aided by the fact that they are familiar with each other’s driving styles . . . and the fact that Eddy is riding on Triangle TR968 UHP tires.

“The car feels pretty amazing, and a big shout-out to Triangle Tire for making this season possible,” Eddy said. “This is my second year competing on TR968 tires; very durable and predictable, which is what you want from your tires in drifting competition.”

As Eddy explains it:

“Team tandem consists of at least three drivers and up to four total. Three is generally better because the more cars you get, the harder it is to keep close tandems. We stuck with the same team as the past two years. It was Tory Jelinek, Nate Snyder and me. Nate’s pro am car was being worked on so he bought a cheap Nissan 240sx to compete with us.”

“We knew Nate was going to be the slowest of the three so we put him in the front to lead us. He did a phenomenal job! As the leader, you want to take the widest line possible to allow the chase driver to stay close.

As we kept practicing, we gained confidence . . . particularly as we saw some of the other teams struggling to get a groove.”

REACHING THE FINALS AND WINNING

“We drove our way into the finals, and things were shaping up for us to win. The final team we faced had a four-car team. On our final run, Nate put on a great lead; Tony and I stayed right with him the whole time. We made a perfect run on the second run, and when we saw the other team make some major mistakes, we knew the first-place trophy was ours.

It was great to hear the other drivers say, ‘we knew when we say you guys do your first practice run, it was over.’ It’s nice to get that from the other drivers and it’s why we love this sport so much; we all support each other.

Speaking of support, in addition to Triangle Tire, I would like to thank my other sponsors – Whiteline, Bohnman Customs, iRaceautosports and Chris Jeanneret.

We’re off to a great start and are looking forward to a fantastic season!” 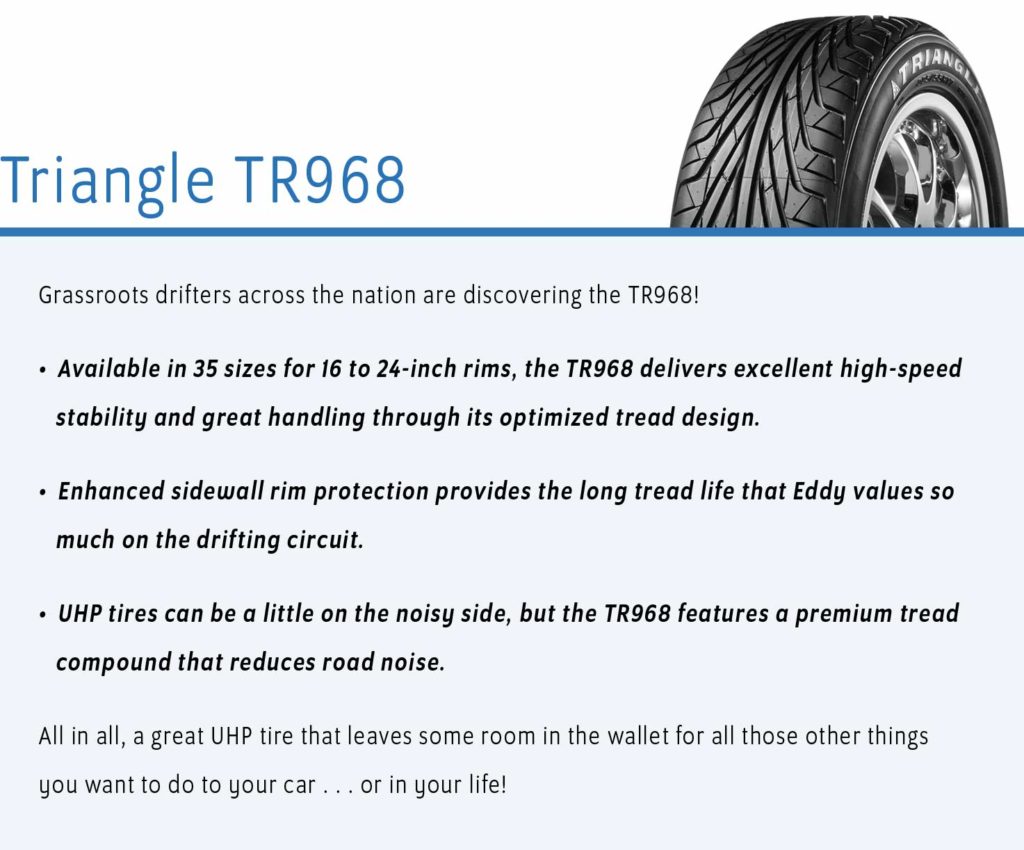